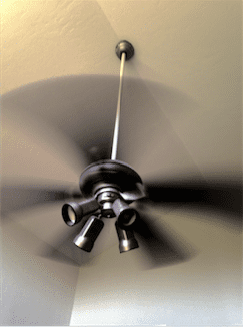 Is your ceiling fan looking a bit wobbly up there? Not only is it annoying with all the racket it’s making, but the vibration from the wobbling can damage the fan, shortening its life.

Well, don’t worry. The problems are minor-as are the fixes!

Ceiling fans usually wobble due to one of these two reasons.

Potential problem 1: The fan is loose at the electrical box

Your ceiling fan may be loose because the screws that connect the ceiling fan into its electrical box (also called a fan fixture box) are loose.

You’ll know if loose screws are the problem if, while the fan is off, you can easily move the fan while gently shaking it.

Fix this problem ASAP, otherwise you risk having the fan plummet into your room.

How to fix the problem

Potential problem 2: The blades are unbalanced.

Over time, your ceiling fan will wobble because the blades become unbalanced. This just means that too much weight on one blade throws off the fan’s center of gravity when it spins.

Imagine you were spinning in place with a gallon of milk in one of your hands. It would certainly throw you off balance, right? But, for a fan, all it takes is .5 grams to throw a blade off balance.

How to fix the problem

If the wobbling persists we suggest calling an electrician for help