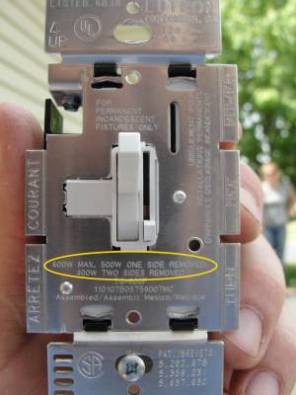 First of all, is the dimmer switch hot or just warm?

It’s perfectly normal for a dimmer switch to be a little warm when your lights are on (or partially on). But if it’s hot, there could be a problem.

Dimmer switches get warm because they have electronic devices inside of them to take care of the dimming.

In this article, we’ll take a look at:

How hot is too hot?

In general, if the switch is too hot to touch for more than a second, it’s probably too hot.

Underwriter’s Laboratory (U.L.) allows a maximum operation temperature of 195F for dimmer switches. But the average dimmer operates much lower, at approximately 140F.

That might seem quite hot, but most of that heat is contained within the electrical box in your wall. The plastic plate on the wall doesn’t usually get that warm.

But if your dimmer light switch is getting very hot, the problem is likely that…

Your dimmer switch is overloaded

Every dimmer light switch has a maximum load, measured in watts, that it can safely handle. If your dimmer switch is excessively warm, you may have too many bulbs running off it.

How to tell if your switch is overloaded:

Note that the rating is reduced when installed next to another switch (or two) in the same electrical box. This is because you’ll have to remove a tab, which reduces how quickly the switch can dissipate (get rid of) heat.

Example dimmer switches installed next to each other, with tabs removed. Photo credit: Reuben Saltzman, StarTribune

What to do if your switch is overloaded

If, after adding up the wattages of the bulbs, you realize you have too many bulbs on a single switch, you have a few options:

If you’re still concerned that your dimmer switch is running too hot or just want a professional electrician’s help fixing the problem, contact George Brazil. We’ve been serving Phoenix and the surrounding areas since 1955.