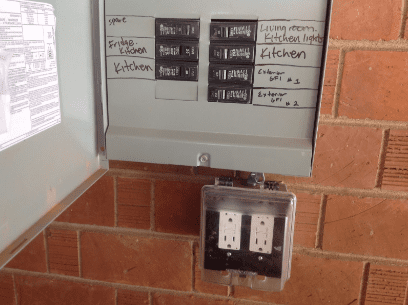 A question we see often is “Can I replace my 15-amp breaker with a 20-amp breaker? My smaller breaker keeps tripping!”

The answer: It’s possible, but not advisable without an electrician evaluating the situation.

You should never just upgrade from a 15-amp breaker to a 20-amp one just because the current one is tripping. Otherwise, you may burn your house down via electrical fire.

To help you understand why this is so dangerous, you need to know what the circuit breaker is for.

Once we explain that, we’ll show you what’s causing that tripping problem.

All the electrical circuits in your home are rated to handle a certain amount of electrical flow (amps). When too many amps flow through a circuit, the wires overheat and can catch surrounding materials (like insulation) on fire.

Luckily, your circuit breaker detects when there’s too much electrical flow and “trips” (breaks the circuit).

For example, let’s say you have a circuit with wiring rated to handle 15 amps. To protect all the wiring in that circuit, a 15-amp circuit breaker is installed. And if more than 15 amps flows through the circuit, the breaker trips.

The tripping breaker is not the problem, but a sign that you have a problem somewhere that could cause your wires to overheat and start a fire.

Now let’s say you decided to upgrade that 15-amp breaker to a 20-amp breaker. You’ll now have a circuit breaker that will allow up to 20 amps of electricity to wiring that is only rated to be safe up to 15 amps.

Sure, the breaker is less likely to trip. But it’s at the expense of damaging your home and putting your family at risk.

That’s not a tradeoff you want to make.

So, if a bigger breaker won’t solve the tripping problem, what will? Well, it depends on what’s causing the breaker to trip. So let’s look at the…

Causes of a tripping circuit breaker

A circuit breaker usually trips because of one of these issues:

In order to keep the circuit breaker from tripping, you need to fix the underlying problem. You can learn more in our article Why Does My Circuit Breaker Keep Tripping?.

Important: Do not just keep resetting the breaker! Eventually the breaker will fail and won’t protect your circuit from damage.

If you want help finding out what’s causing your breaker to trip, contact a professional electrician for help.

If your breaker keeps tripping and you live in the Phoenix metro area, contact George Brazil’s electricians for help.