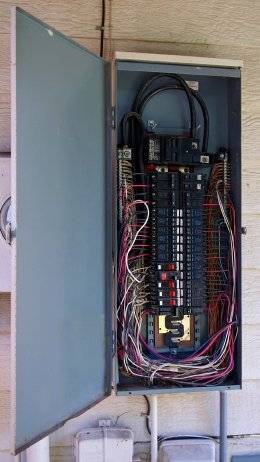 Going outside to mess with your tripped circuit breaker can be overwhelming if you don’t know what or why it happened.  If you’re not an electrician we’d suggest you contact one.

Something may be seriously wrong with some electrical wires as to its overloading of current. A circuit breaker “trips” or shuts off the electrical flow to protect the circuit from overheating and causing damage–even possibly an electrical fire.  We don’t want to alarm you, but it’s better to be safe than have you or a loved one hurt or in danger.

Before you go and flip the switch on again, take a moment to determine what the root cause is of the tripping of the circuit breaker.

The three typical causes are:

The circuit overloading is the most common reason your circuit breaker is tripping.

That means you’re running too many heavy power consuming devices at the same time on the same circuit.

For example, if you have a 15 amp circuit with 20 amps worth of electricity running through that same circuit because your hair dryer, TV and air conditioner were all on at the same time, then the circuit breaker will trip to prevent overheating.

There are two solutions:

UPDATE: Another cause of an overloaded circuit is an overheating appliance. It pulls in more amps than normal, causing the circuit to overload. An overheating central air conditioner is notorious for this during the summer.

The next possible (and more dangerous) cause is a short circuit.

A short circuit happens when a “hot” wire (black) touches another hot wire or touches a “neutral” wire (white) in one of your outlets.

When these two wires touch, a large number of current flows, creating more heat than the circuit can handle, so it shuts off.

You can tell if there was a short circuit by checking your outlets and plugs for the smell of burning, or brown/black discoloration.

These wires can cross for multiple reasons, but it could be as simple as a loose connection or improper wiring.

Similar to a short circuit. A ground fault happens when a hot wire (black) touches the ground wire (bare copper) on the side of a metal outlet box which is connected to the ground wire.

Just like a short circuit, you need to see if anything looks out of the ordinary with your outlets.

Need help with your Circuit Breaker in Phoenix, Scottsdale, Glendale, Mesa or in the East Valley of AZ?

Our number one recommendation with electricity is to call us and have one of our highly trained and knowledgeable electricians visit your home to make these determinations. Safety first, always!!! If you’re not sure which of the problems listed above is causing your circuit breaker to trip, and want on-site help with your circuit breakers or to check your wiring, contact George Brazil.