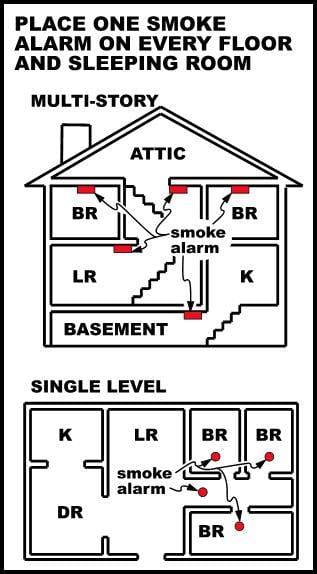 Having the right number of smoke alarms in your home isn’t just a safety measure, it’s the law.

In fact, Arizona follows the 2006 International Fire Code (IFC) with amendments when it comes to this question.

So what’s the answer? Well, for the most part, the number of smoke detectors you need depends on how many bedrooms and stories you have in your home.

We’ll explain in more detail below.

One in every bedroom

A smoke alarm is legally required in every bedroom of the house or any room that’s used for sleeping.

That’s pretty straightforward. But where should those alarms be placed inside each bedroom?

Well, we suggest you make sure your alarms follow these placement guidelines:

One additional alarm outside any sleeping area

According to the 2006 IFC, an additional alarm should be placed “on the ceiling or wall outside of each separate sleeping area in the immediate vicinity of bedrooms.”

At least one on every story, including basements

If your home has several stories, you need to make sure that at least one smoke alarm is placed on every story (not including crawl spaces or uninhabitable attics).

Have concerns about your home’s smoke alarms? Ask an AZ electrician

Not sure if your home’s smoke alarm situation is up to code? We’re here to help.

Just contact us and we’ll send over an electrician who can inspect everything and make any needed changes.