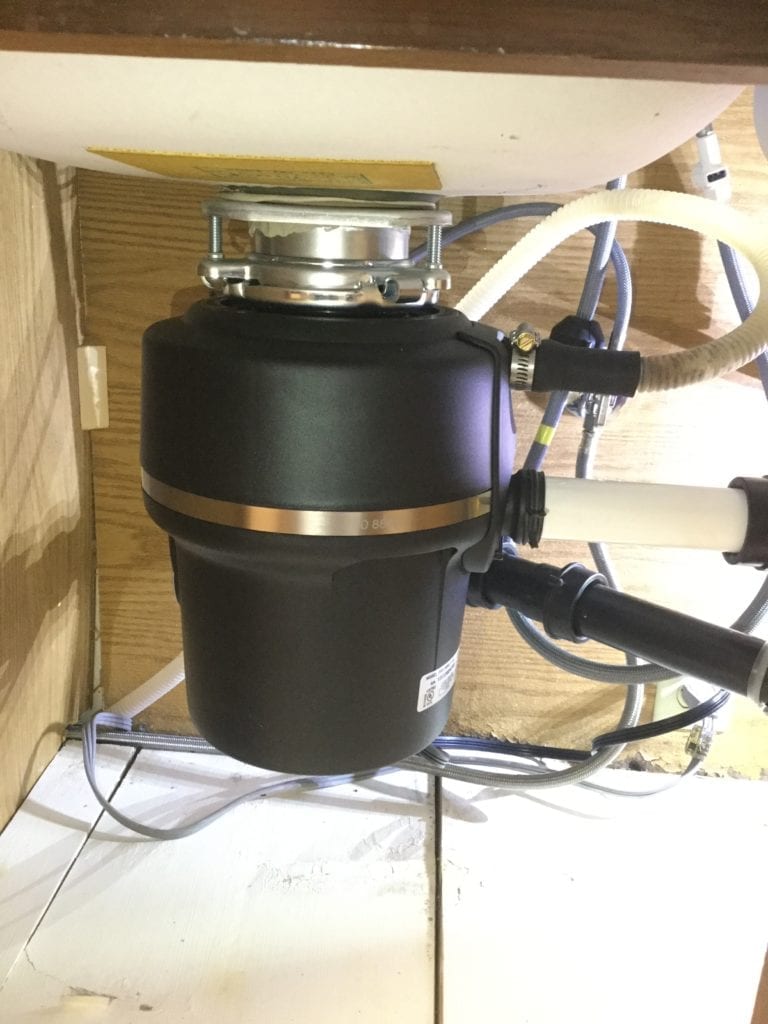 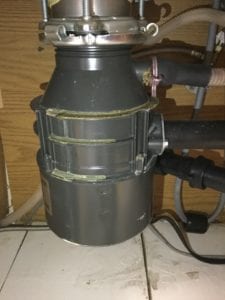 Hidden away under your sink, rarely seeing the light of day is your garbage disposal. The garbage disposal is perhaps one of the least appreciated appliances in the kitchen that does the worst job. It’s designed for grinding up old food scraps, and soft kitchen waste to a consistency that can safely pass through the waste pipes and out of the home into the sewer. You may not think much of it until it breaks, and then the problems are difficult to ignore. There are multiple factors that can result in garbage disposal not working. The signs this has
happened usually include one or more of the following: whirring but no grinding, bad odor, leaking, or it simply not turning on at all.

Before you ever work on or attempt to clean a garbage disposal, disconnect thepower to it by either unplugging it or flipping off the circuit that controls power to that portion of your

kitchen. Always use a flashlight to view what is inside the unit. Use a pair of pliers to dislodge anything from the disposal, not your hands. Do not put your fingers or hands into the disposal. If a clog was suddenly removed and the machine roared back to life while your hand was in there, it could mean a very unpleasant trip to the emergency room.

One of the biggest reasons a garbage disposal fails is that it simply wears out. Wear and tear on a garbage disposal over time will cause its components to fail. The blades could come out of alignment, the motor could burn up or it could rust or corrode to the point where it leaks. If your garbage disposal is not working correctly and it is more than ten years old, it may be a good idea just to replace it. New parts for an old disposal may be challenging to find and may cost more than just buying a new unit. A sign that your garbage disposal is “aging out” and on its last legs can include grinding noises or irregularities in the motor’s operation. If you’ve (unplugged and turned off first) checked an old disposal to be sure there’s nothing caught in the blades causing the grinding, ensured the blades are properly aligned, and it still sounds like a death metal band, it is probably time to consider replacing it.

A garbage disposal has a reset button to help you with situations like a jam or clog. It should not have to be reset frequently. Older disposals that need to be reset often might be indicating that they are “aging out” and need to be replaced.

NOT USING THE DISPOSAL ENOUGH

Like most machines and motors, a disposal must be run frequently, or it will break down just as much as if it were being misused. Motors were not meant to be left sitting for long periods. Not using the disposal can cause it to rust and corrode, and if the sink is still being used, items can build up in the garbage disposal mechanism without being cleared by the disposal being turned on and run. If it hums when you turn it on but does not function, it is likely that the blades cannot rotate because they are clogged, corroded, or rusted.

PUTTING THE WRONG WASTE IN THE DISPOSAL

If you are putting things into your garbage disposal that should not go down it that are beating it up, you could reduce its life span. Remember a garbage disposal is intended for smaller things such as what is washed off your dinner plates and light scraps. Putting all of your kitchen waste down the drain is not only risking clogging your waste pipes, but it could also damage your garbage disposal!

Waste objects that can wear out a garbage disposal fast include bones, large pits, fibrous refuse like onion skins, corn husks, banana peels, and other items that could dull the blades and wrap around the impellers. Over time, this can wear down and burn up a disposal’s motor. Even things as seemingly innocuous as seafood shells and potato peels can be trouble in a garbage disposal. These have a lot of starch that will build up and cause a clog.

It is commonly known that you should not pour cooking oil and grease down a disposal, but many other foods contain high amounts of fat that could solidify and cause problems. Some items are better thrown in the trash, and standing grease in a pan can be poured off into a glass jar and disposed of separately.

A spoon falling into the disposal is an obvious problem that can be easily remedied, but other foreign objects may sneak into a disposal without you noticing. Think bits of tin foil, wire twist ties for bread bags, bottle caps, soda can tabs, and food stickers or wrappers. These have the potential to cause a lot of grief.

Never, ever use your disposal to get rid of anything non-food such as old sponges, old prescription medications, rubber bands, houseplants, or plastic utensils. Even if you successfully grind it up and it does not damage your disposal, think about further down the pipeline. These objects can cause problems at your local sewage treatment plant as well.

NOT MAINTAINING THE DISPOSAL

Maintaining your garbage disposal is an essential part of keeping it operating efficiently. 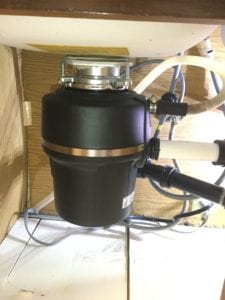 Garbage disposals, for the most part, are self-cleaning, but over time, things can build up inside. Cleaning a disposal regularly can cut down on any odors and flush foreign substances and objects from inside the unit that wasn’t removed with regular operation. Using a little vinegar and baking soda solution or rock salt and ice can help clean and deodorize the unit. We like to make vinegar ice cubes to toss in weekly.

If disposal is grinding, the components of the unit may be misaligned, causing them to grind against each other when the disposal is turned on. Misaligned parts in a disposal can usually be adjusted if the unit was not damaged. If it is making bad noises, turn it off right away to avoid permanent damage.

About every six months, check the pipes under the sink. The vibration of your garbage disposal’s operation can cause things to come loose and cause a leak. Sometimes all that is required is adjusting and tightening drain pipes or replacing a rubber gasket. However, if a leak is coming from the bottom of the disposal itself, such as through the opening where the reset button is, you will likely have to replace the unit.

If your garbage disposal frequently stops running or will not turn on, check the circuit that controls power to it. If your disposal trips the circuit repeatedly, it may be on its last legs. There may also be an issue with the switch in the wall that controls it or loose wiring. Check to be sure the disposal is plugged entirely into the wall, and there is nothing under the sink, putting pressure on the outlet. If you suspect the switch has gone wrong, you should have it diagnosed by a licensed electrician or plumber.